In October of 2018, the John D. and Catherine T. MacArthur Foundation awarded Allegheny County a Safety and Justice Challenge grant to reduce the population of the Allegheny County Jail by 20%. This series of reports outlines the progress made in the first three years of the project, as well as plans to continue reforms in the criminal justice system, address racial and ethnic disparities and engage community members in this work.

Allegheny County is committed to allocating criminal justice resources in a systematic way, utilizing evaluation and evidence-based programming to better understand the costs and benefits of various programs. To further this goal, Allegheny County partnered with the Vera Institute of Justice to implement a system of cost–benefit analysis throughout its criminal justice system. The cost analysis includes the cost of an arrest, the cost per day of incarceration or detention, and the cost per day of supervision, including adult and juvenile caseloads, in Allegheny County.

What can we learn from calculating costs in the criminal justice system?

Understanding the drivers of costs within these systems (e.g., changes in population served, changes in operating costs, or both) allows analysts to value the benefits of current and proposed programs. This information is also valuable for policy-makers who can compare the benefits and costs of programs to make informed management, budget and program decisions.

In response to the COVID-19 pandemic, many jurisdictions across the country took measures to reduce their jail populations as a way of lessening the risk of disease spread. This included Allegheny County, which decreased the Allegheny County Jail (ACJ) population by considering for release older and health-compromised individuals, individuals sentenced to the jail who could be paroled early, and individuals awaiting trial or probation violation hearings who could safely be released.

This data brief explores the decrease of the ACJ population between March 16, 2020, and June 1, 2020, and the recidivism of individuals released during this period.

What are the takeaways?

The City of Pittsburgh Bureau of Police (PBP) tracks each incident in which an officer uses force with a subject. The most current report on police use of force and the previous report provide an overview of incidents in Pittsburgh. The reports describe trends, circumstances of incidents, control techniques used, and incident outcomes. The analyses also describe charges commonly filed against subjects, subjects’ demographics, and the distribution of incidents across the police force.

What are the takeaways?

The dashboard below provides information about Allegheny County Jail population management, including the daily jail population, population in alternative housing, bookings and releases, and lengths of stay. Data is available from 2018 to the present and is updated daily.

Trouble viewing the dashboard? You can view it directly here.

In Allegheny County, a preliminary arraignment is a defendant’s first court appearance, during which a judge notifies the defendant of their charges and a bail determination is made. Defendants are not guaranteed legal representation at preliminary arraignments, but lack of representation can have serious consequences for fairness and equity in court proceedings, as well as a substantial impact on the jail population.

In April 2017, the Allegheny County Office of the Public Defender began a pilot project utilizing existing staff to provide legal representation for all people arraigned during business hours at Pittsburgh Municipal Court. The outcomes of the first year of the pilot are encouraging. Compared to a matched sample, people represented by public defenders at preliminary arraignments:

The presence of police officers in schools has become increasingly common since the practice was introduced in the 1950s. While law enforcement in schools may deter criminal behavior, it can also have the effect of increasing youth juvenile justice system involvement. Allegheny County Department of Human Services (DHS) wanted to learn more about youth arrests in Pittsburgh, particularly differences related to where an allegation happens — in or out of school — and how the outcomes of students involved with the juvenile justice system differ from those who have not been involved. We also wanted to know more about students’ involvement with human services in order to better understand where there might be gaps in services and supports for students involved with juvenile justice.

To explore these questions, we took a descriptive longitudinal look at students who were registered in Pittsburgh Public Schools (PPS) in school year 2010 and followed them through 2018.

In recent years, PPS has put in place programs to divert students from the criminal justice system as well as implement restorative justice practices in schools, which we hope will lead to a reduction in disproportionality and improved outcomes for students.

Throughout the United States, people experiencing behavioral health challenges are overrepresented in the criminal justice system and Allegheny County is no exception. To better understand the state of our current system and to learn more about promising approaches in other jurisdictions, Allegheny County sought an independent evaluator to conduct a study. From among a number of proposers, the county selected researchers from the University of Pittsburgh who interviewed dozens of stakeholders, analyzed justice system data, examined models from other jurisdictions, and solicited feedback through a series of workshops.

Select from the links below to learn more about the researchers’ findings and recommendations:

This report describes women in the Allegheny County criminal justice system with a goal of better understanding the population by exploring their demographics and human services history. The analysis describes women at three stages in the criminal justice system: women who had criminal filings, women booked into the Allegheny County Jail (ACJ), and women released from the ACJ. 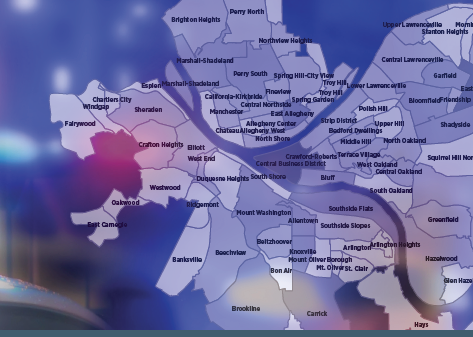 Analysis of arrests over time provides valuable insights about a city and its changing crime trends and law enforcement policies. This series of three reports uses data from the City of Pittsburgh Bureau of Police and the Allegheny County Data Warehouse to look at arrests since 2001 and the people who were involved.

Arrest Trends in the City of Pittsburgh provides an overview of arrests and people who were arrested in 2001 through 2015, including rates over time, crime types, demographics of people arrested and neighborhood trends.

People Arrested More Than Once in the City of Pittsburgh takes a closer look at the people who were arrested multiple times. This analysis describes the demographics of repeat arrestees, the types of crimes for which they were commonly arrested, neighborhoods where repeat arrests occurred, and human services and criminal justice system involvement of repeat arrestees.

Human Services Involvement of People Arrested in Pittsburgh describes involvement with other systems of people who were arrested. Analysis of people’s involvement with human services and the criminal justice system before, during and after arrest offers insight into the needs and service experiences of this population.

In 2016, the Allegheny County Jail began offering naloxone, a life-saving medication that rapidly reverses opioid overdose, to people exiting the jail. Since then, the jail has distributed over a thousand naloxone kits. This data brief describes the naloxone distribution program and provides information on the people who received naloxone, including their demographics, the communities they lived in after leaving jail, and how many died of an overdose following their release from jail.

The Allegheny County Jail Collaborative is a group of government agencies, nonprofit organizations, volunteers and community members who are committed to improving the transition of people returning to the community after leaving the Allegheny County Jail. This report describes the Jail Collaborative’s 2016-2019 strategic plan, progress that has been made in the past year and advancements expected in the coming years.

Trouble viewing the dashboard? You can view it directly here.

The Allegheny County Jail Collaborative is a group of government agencies, nonprofit organizations, volunteers and community members who are committed to improving the transition of people returning to the community after leaving the Allegheny County Jail. This report describes the Jail Collaborative’s 2016-2019 strategic plan, progress that has been made in the past year and advancements expected in the coming years.